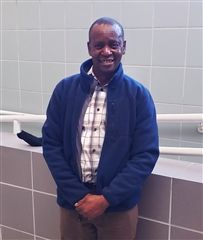 2/26/2021
Chris Allinotte, Marketing & Communications Coordinator
Having spent more than 20 years as part of the maintenance team at Balmoral Hall School, Richard Ndlovu has had the opportunity to witness hundreds of BH girls enter the school, grow up, and graduate. For every one of them, he’s had time to take a minute or two to talk, to listen, and always to offer a friendly smile. He’s been like a cool uncle to our students, and his friendships within the entire Balmoral Hall community cannot be overstated.
It was even more humbling, then, in sitting down to speak with Richard, to learn that in his life he’s faced and overcome more challenges than most of us will ever encounter. In 1976, Richard was in Grade 9 in Soweto, South Africa and his school just so happened to be located across the street from the Mandela household. He recalled seeing Winnie as she organized demonstrations, and she often spoke with him and his friends. At that time, Nelson Mandela had already been in prison for 14 years, and it was a crime to speak his name.

“They didn’t want you even saying his name,” Richard recalls, “because that would mean you knew who he was. And they wanted him to disappear. If you knew his name, then you might know something else about what he was doing, and they didn’t want that.”

For Richard and his friends, one of the ways they felt the government’s control most directly was the mandate that core school subjects be taught in Afrikaans.

“Most of the teachers weren’t qualified to teach math or physics in Afrikaans. We wanted to learn in English. Afrikaans isn’t spoken outside of South Africa and a handful of other countries.”

On June 16, 1976, when Richard and fellow students arrived at school, they gathered and went out into the streets together to march against the government’s edict. The police responded with violence and shot directly at the students. There is a photo from that day, the Soweto uprising, that has become very well known; in it, a schoolgirl is walking down the street, holding a boy in her arms, while another girl – the boy’s sister – runs alongside. Richard was on the other side of the street when that happened.
By September 1976, some of Richard’s acquaintances were involved in the growing protest movement, and the government was cracking down. Richard’s family worried that he’d be caught up by the police, who were looking to capture these young protestors by interrogating their associates. That month, Richard left South Africa.

For the next few years, Richard travelled through several countries, staying at refugee camps in Tanzania and Kenya. He also spent some time in Libya training to serve in the military.

“It was boring,” Richard remembers of the refugee camps. “You couldn’t work. You just had to stay there the whole time.”

In 1986, he decided to try his luck with resettlement. “People applied to countries all over the world,” he says. “I applied to Germany, the Scandanavian countries … Canada was the first to take me in.”

Groups of refugees were welcomed into Canada every three months. Ten people made the trip with Richard. Many of them stayed in Toronto, but Richard and three others continued west, eventually settling in Winnipeg.
Richard got to work soon after arriving here. He finished high school, and soon found himself working at an all-girls school, where he remains to this day.  When asked about the other refugees he travelled with, whether he kept in touch with them, he mentioned that many, especially those who were still single, had been waiting to go home as soon as they could, and, when Nelson Mandela was freed in 1991, many of them did just that.
By then, Richard was married and was pretty well established in Winnipeg. He sought citizenship, he says, “so I could be treated with the same rights as a Canadian.” At the time he became a citizen in 1991, he was still considering his return to South Africa. Now, over 20 years later, here he remains.

On behalf of the Balmoral Hall School community, and especially the hundreds of BH girls who have had their lives enriched by knowing this kind, soft-spoken, selfless man, we are truly happy he’s stayed.
Back