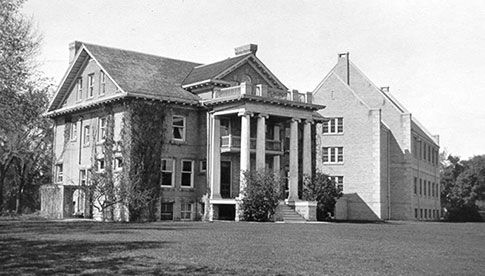 Balmoral Hall School was established in 1901 as Havergal College. The doors were opened on 122 Carlton Street under the direction of Miss Mary Jane Dalton. Havergal’s name was changed in 1917 to Rupert’s Land College to end the confusion with the institution of the same name in Toronto, and to link the school more closely with the West.
Aikins House was a gift to the United Church of Canada from Sir James Aikins upon his death in 1929. He stipulated in his will that it be used as a school for girls, and bequeathed a further amount for its upkeep. Sir Aikins’ son, Col. G.H. Aikins also presented his own home (the Red House) to the cause. As a result, Riverbend School for Girls, named after the first building, was opened in September 1929 at the present site of Balmoral Hall School.
By 1950, a decline in students had created deficits at both schools. Rupert’s Land Carlton Street facility did not allow for expansion, so it was agreed that the schools would amalgamate to the Riverbend campus. The new school was named Balmoral Hall after Balmoral Castle in Scotland, one of the homes of Britain’s Royal Family. School began in September 1950, under the direction of Miss Gwendolyn Murrell-Wright.

The History of Aikins House

The stately 20-room, three-story house was designed by John H.G. Russell and built in 1902 for Sir James and his family. Russell was a well-known and prolific Winnipeg architect whose work includes Knox and Westminster Churches, the Ashdown House and the Ashdown Warehouse.

After the United Church took over the property in 1929, the house was used as the girls’ residence until the early 1970s. It also housed the Headmistress and, occasionally, teachers. Various activities took place in the house over the years, such as staff meetings in the library, classes, science laboratories and school club meetings. In 1972, it housed the Headmaster and his family, a practice that continued until 1994. It is currently used for special school functions such as alumnae reunions, Board of Governors meetings and entertaining parents, staff, students and friends of the school. Sir James A.M. Aikins played a significant role in the early history of Winnipeg and western Canada and Aikins House is a monument to his achievements. Balmoral Hall School is dedicated to restoring the building to its former dignity so that the school community and the public may enjoy all it has to offer.
The house received historical designation from the City of Winnipeg in 1999, with a Grade III priority on the building conservation list. The designation includes the outside of the building, the entire main floor and stairwell and the second floor fireplaces. The Heritage Committee of the Alumnae Association restored the main floor of the house in time for the school’s centennial celebrations in 2001-02. Also completed was the restoration of the front staircase and painting & carpeting on the 2nd floor. In 2011-12, Balmoral Hall received a grant from the Winnipeg Foundation to restore the windows on the main floor of the building to the original sash window design with traditional storm windows.

Sir James Aikins was born in Ontario on December 10, 1851 to Mary Elizabeth Jane (née Somerset) and James Cox Aikins, who was later called to the Senate. He was educated at Upper Canada College and the University of Toronto, graduating in 1875. In 1878 he traveled to Manitoba and opened his one-person law firm. He was successful as a lawyer and expanded his business, which still flourishes today as Winnipeg’s oldest and largest firm, Aikins, MacAuley & Thorvaldson. He was involved in many important legal affairs of the day, including the appeal of Louis Riel, the Royal Commission on Administration of Justice in the Northwest Territories and drafting of the Manitoba Liquor bill in 1882. He founded the Canadian and Manitoba Bar Associations. He was appointed Lieutenant Governor of Manitoba in 1916 and served until 1926, a record of long service that still stands today. He died in March 1929.
Outside of his distinguished career, Sir Aikins built a solid reputation as a community leader. He was a generous supporter of the fledgling University of Manitoba and was its honourary bursar for over two decades. He chaired the Royal Commission on Manitoba University and was a member of the Royal Commission on Agricultural Education. He was also Chairman of the Board of Wesley College (later the University of Winnipeg) for 20 years. He became the Chief Scout for Manitoba and was named Honourary Lieutenant Colonel of Winnipeg’s 90th Regiment, the Royal Winnipeg Rifles and the 99th Regiment in Brandon.