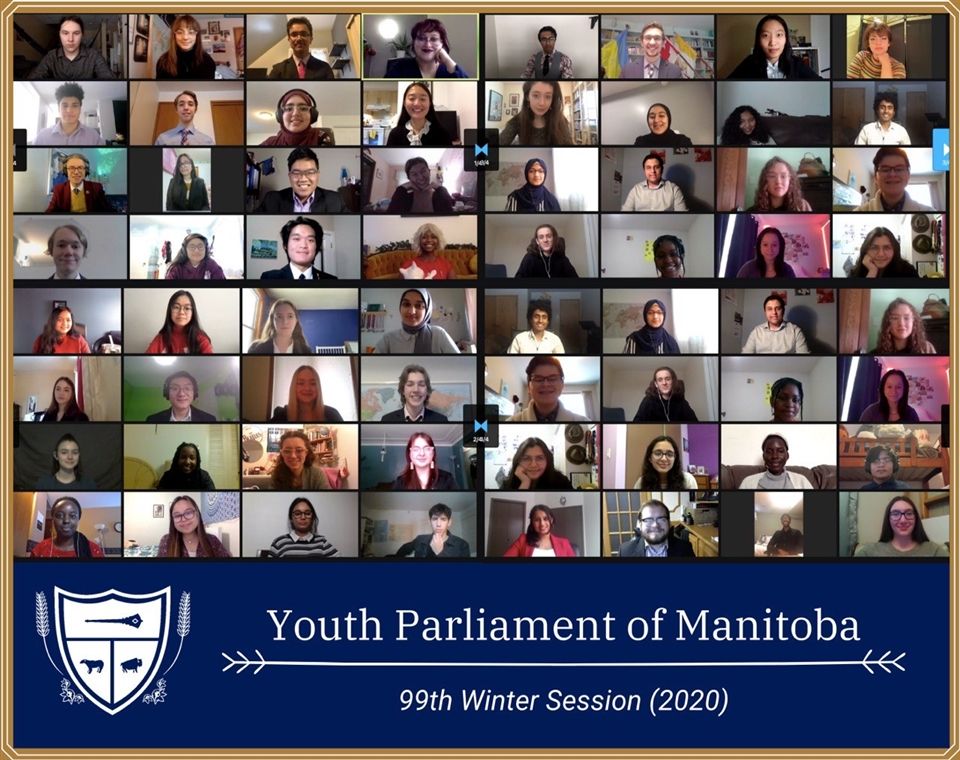 A NEW PERSPECTIVE ON POLITICS FROM VIRTUAL YOUTH PARLIAMENT

1/21/2021
By Breanna, Grade 11
No matter your age, politics play a crucial role in your life. From the moment you wake up in the morning to the minute you go to bed, every action you take has political value and impacts our government, even when you don’t think it does. This is why education surrounding our government and also our potential roles in government are so important. The Youth Parliament of Manitoba is one of Canada’s longest continuously running youth parliaments and just celebrated its 99th anniversary this past winter session, which was held virtually from December 26–30, 2020.
Youth Parliament is a completely youth-run organization, with members ranging in age from 16 to 25. Our backbenchers represent constituencies from across Canada, working alongside our cabinet and executive. The executive members direct the organization and oversee the events while the cabinet consists of volunteers who work year-round to aid the executive in organizing events and sessions.

This year, the executive knew that the pandemic was no excuse for completely cancelling the winter session. Instead, the five-day session was hosted on Zoom. To say it was a rewarding but challenging experience would be an understatement. Our Parliament follows a strict schedule, very similar to proceedings in official government. This includes caucus meetings, sittings dedicated to amending legislation, as well as debates and question periods. Throughout the session, cabinet ministers present bills that are debated and amended during the week. This year, these bills included the inclusionary housing act, the education concealment act, the temporary foreign workers’ rights act, and the transportation reformation act.

Backbenchers had the opportunity to present private members’ bills, which were written after sittings on Zoom, and I helped to develop a bill on reforming our history curriculum in Canada. My committee stayed up until 3 a.m., two nights in a row, in order to perfect the bill and prepare for the next day’s debate. I also had the opportunity to act as the critic for the temporary foreign workers’ rights act, which helped me develop my public speaking and speechwriting skills. This, along with question periods, were my favourite parts of the session — not only because I’m known to be quite a devil’s advocate, but the support from other members was truly unbelievable. Every member had very different political views, but we all share a passion for social justice issues and debate, making our Parliament run as smoothly as it could while still finding issues to be discussed.

On top of our regular government proceedings, we also had the chance to meet with current and former members from the Progressive Conservative, Liberal, and NDP provincial and federal caucuses. Members Doug Eyolfson, Hon. Audrey Gordon, and Hon. Gary Filmon offered their advice and listened to some of our debates. We discussed issues concerning the pandemic, as well as asked questions about why they decided to enter politics. It was also amazing to hear from members who are alumni of Youth Parliament and how it helped lead them towards their current careers.

One thing I didn’t know before the session is how many people my age have the same passion for social justice issues that I am interested in understanding at a deeper level. It was so interesting to hear different arguments about the legislation being debated. I entered this experience with no knowledge about government proceedings, and now I can positively say I understand why our government can never come to a decision. Jokes aside, this session was truly life-changing, and I look forward to pursuing a cabinet position next year, while further developing my knowledge of politics.
Back
Date Posted
No comments have been posted