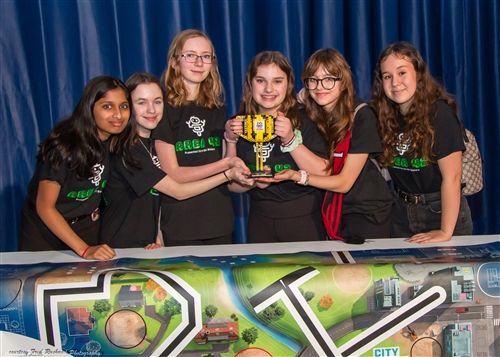 2/24/2020
By Janet & Claire, Grade 8
A few weeks ago, a Middle School robotics team consisting of Janet, Jozi, Grace, Claire, Asmara, and Reagan had the opportunity to participate in the FIRST LEGO League robotics tournament in Edmonton, Alta. On January 30, 2020, the day before the competition, we all hopped on a plane and travelled to Edmonton. We spent the day preparing and unpacking, and everyone was feeling a little nervous. When it was time to compete the next day, we were ready with our black pants and super cool team shirts for a day full of robots!

We gave three technical presentations before the actual robotics competition, including our research innovation project. We had a lot of fun presenting a skit we had prepared for this project, and, with guidance from our coach Mrs. LaPage, we were quite successful in this category. The next thing we knew, we were heading to the gym for the robot games. The room was crowded, and there were strobe lights and pop music and many cheering fans! We competed against several teams and had three successful rounds of robot games. In these rounds, our robot had to complete an assortment of challenges while avoiding many obstacles. We were challenged with having to properly code our robots to perform various tasks, and, while we ended up running into some challenges along the way, we still placed well in this portion of the tournament and learned a lot during the process. Thanks to Reagan and Grace, our pit crew, we ended up in the top half of all competitors! As if our day wasn't great enough, we received an award for our research innovation project!
During the weekend, we also had the opportunity to visit an escape room as a team, and, of course, do some shopping at the mall. We had a wonderful few days learning a lot while creating memories. We gained a lot of experience in public speaking, problem-solving, designing and programming robots, and team building. We really want to take this opportunity to thank Mrs. LaPage for her dedication to our team, giving up many of her weekends to help us!
While the competition is over, robotics hasn't ended! There is a club for students in Middle School who are interested in learning more about designing and programming their own robots. This club runs on Mondays from 3:25 – 5 p.m. until the Victoria Day weekend. Interested students can speak to Coach Elizabeth LaPage to learn more about participating.