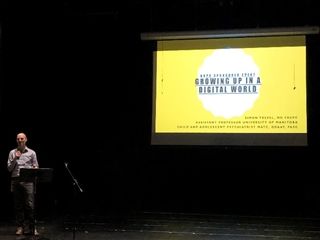 "SEDUCED BY SCREENS" — WHAT WE CAN DO

In the 1980s and 1990s, young people were outside for about 18 hours a week. Today, kids interact with nature less than seven hours per week. Many of them prefer being on a screen to any other activity. Some have three devices going at the same time! In 2005, the average age of exposure was 4 years old; by 2013, it was 4 months. A study conducted in 2016 determined that 92% of 1-year-olds had used a mobile device. Nowadays, 50–60% of 4-year-olds have a TV in their bedroom and own a tablet or a mobile device. Teens send 30–100 texts for at least one hour daily. The majority of North American youth spend more time on screens than sleeping, eating, going to school, or spending time with family and friends. Is there anything parents can do to reverse this trend? Or, is this "progress"?

Dr. Trepel counsels adults to assess whether screen time is interfering with other aspects of children's lives, especially sleep. It's also important to understand if online interactions are predominantly negative. Is your child's self-esteem being diminished? Is she being bullied? Is she being exposed to content she isn't ready for? Is she being encouraged to send explicit photos? Is she being taken advantage of? Lastly, is she becoming overstimulated?

It is also important to understand what makes our girls happy. Studies have shown that sports, exercise, in-person interaction, religious service, print media, and homework (?!) have been shown to have positive effects, while reading news online, television, video chats, texting, social media, computer games, and the internet are known to have a negative impact on a young person's state of mind.

Knowing all of this, what can we do? Dr. Trepel says that we need to lead by example. We can do this by offering activities that aren't based on a screen, by doing things with our kids, and by being better role models. Indeed, many of us are on screens for 8–10 hours a day. So …start by putting down your phone. Be a better role model. In addition, be more involved with your children. Share experiences with them. Don't allow phones at mealtime, and don't sleep with your phone in your bedroom.
Thank you to Dr. Trepel for this very informative presentation.