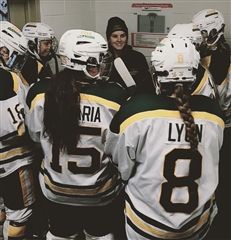 4/16/2020
This upcoming year, I’ll be entering my 7th season behind the bench of the Blazers prep hockey program, but I’ve been around since the program’s early days.

I was lucky enough to play for the Blazers in 2007/08, and I know that coming to Balmoral Hall put my life on a different trajectory. After graduating in 2008, I was awarded a full scholarship to play NCAA Division I hockey for the Niagara University Purple Eagles (College Hockey America) in New York. I received a Bachelor of Science in Biology, minoring in Chemistry and French, and I achieved annual recognition with the CHA All-Academic Team.

I hung up my skates and donned a whistle soon after graduating, and I’ve been privileged to work with both Hockey Manitoba and Hockey Canada since starting my coaching career. I’ve been behind the bench twice at National Women’s U18 Championships, including as silver medallists in 2015, and once at Canada Winter Games in 2019. Most recently, I became a Hockey Canada accredited coaching facilitator and the only female coach in Manitoba who is certified to facilitate coaching seminars!

My role as Director of Hockey at Balmoral Hall School is much more than a job; this community truly is my second family. I am now colleagues with faculty who taught me. Mrs. Kamins was my Senior School Principal and now she is my boss! I work with fellow coaches who are also my closest friends. Most importantly, I coach a group of incredible young women who, every day, aspire to be better than they were the day before.

My role is to help our girls see their perceived ceilings become new floors to stand on.